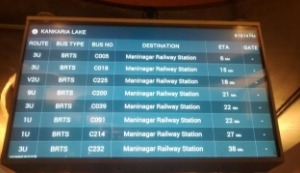 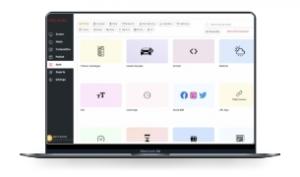 The Intelligent Transit Management System (ITMS) was a complex project. Pickcel’s role in this project was to ensure that accurate live bus data was published on the screens”

A Bus Rapid Transit System or BRTS is a sophisticated transit model that uses various ICT systems to improve the services of buses, make them more disability-friendly, reduce delays, automate fare collection, and make the bus commuting experience convenient for the passengers.

“Each one of the subsystems had a specific role; for example, the AVL system used GPS trackers installed in the buses to monitor their real-time locations. This data allowed predicting the vehicles’ estimated time of arrival and departures,” says Basudev Saha, CTO & co-founder of Pickcel. “Pickcel’s role in this project was to design the passenger information system that would publish accurate bus ETAs and bus information for the passengers at the bus stops.”

A team of highly-qualified experts from Pickcel integrated their digital signage software with NEC’s AVLS. Besides the bus ETA information, the PIS displays at the bus stations were also used to display:

A distinction of Pickcel’s passenger information system was that the information relay maintained a latency period of only 2 seconds.

“A latency period of 2 seconds means that the software takes just 2 seconds to source the live bus details from the AVLS and publish it on the screens at the passenger’s end. That’s a remarkable level of accuracy that we achieved,” explains Basudev.

Another interesting feature of the PIS software was that it could relay all the information multilingually in Hindi and English (the two most widely spoken languages in India.)

Key benefits of the Pickcel software in the BRTS-PIS project:

1. Remote network management: Currently, the PIS drives 144 screens at various BRTS bus stations. As the Pickcel software is hosted at a central server, the network administrators can remotely monitor the status of each PIS screen, troubleshoot, and preview the content rendered on screen.

5. Content Quickplay: The Pickcel software has a unique feature called ‘Quickplay’ that allows the users to override scheduled content and play an emergency message on the assigned screens. This is particularly useful in the public transit sector, which is known to witness road emergencies and blockage.

6. Custom user-role creation: The BRTS is a large-scale setup involving multiple admins using the same application for different tasks. To have a clear demarcation of roles & rights of each user, the network admin has the option to create custom user roles with designated access and control rights.

Before the Ahmedabad Janmarg project, Pickcel had already successfully deployed the PIS for the Hubli-Dharwad (Karnataka) BRTS project. The HDBRTS was also the undertaking of NEC India.

Both the Ahmedabad and the Hubli-Dharwad BRT systems won numerous awards and accolades at national and international levels. The Ahmedabad Janmarg was recognized as the most successful BRTS in India. The UNCC observed a profound socio-economic impact of the Ahmedabad Janmarg; there was a significant increase in female travelers, indicating public trust in transit safety.

Currently, the Ahmedabad BRTS corridor is 101 km long. There are 275 AC buses carrying nearly 1.6 lac (0.16 million) commuters daily. As of now, there are 150 operational electric buses, and the authorities plan to deploy more in the future.

The official Ahmedabad BRTS website notes the environmental impact of this project with the following data:

About Pickcel
Pickcel is a leading SaaS brand specializing in digital signage solutions. Since 2014, the brand has empowered private and public sector organizations to communicate effectively through digital signage. Today, Pickcel is partnered with over 1500 medium & large-scale businesses across 30+ countries, powering 80,000+ screens. The brand offers an extensive range of modern signage solutions like queue management, visitor management, interactive kiosks, and digital menu boards. The company has offices in Bangalore (India) and New York (USA). Some of the top clients of Pickcel are Amazon, Hindustan Unilever, Asian Paints, JW Marriott, Radisson Hotels, and Mercedes-Benz. With its remarkable global presence, Pickcel has emerged as one of the most cosmopolitan and sought-after brands.